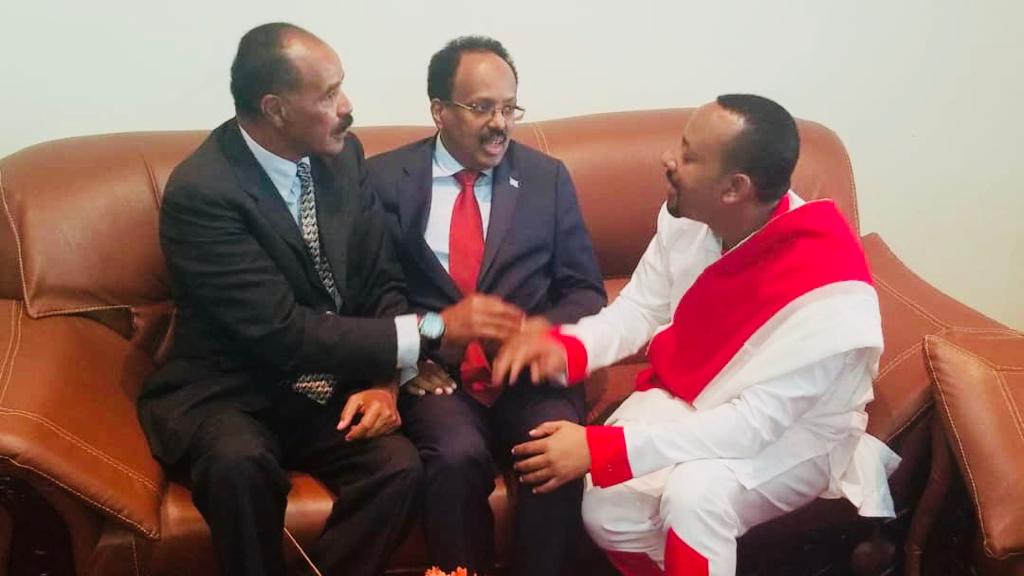 The Ethiopian Prime Minister Abiy Ahmed concluded a second round of intense negotiation with Presidents of Somalia and Eritrea Mr Mohamed Abdillahi Farmajo and Asias Afwarki in Bahir Dar on the shores of Lake Tana in northern Ethiopia.

Though the official cover of the summit was to convince the Somali President to support the lifting of arms and other sanctions from Eritrea in the UN Security Council’s October 14th meeting, the real discussion centered around an Ethiopian naval base in Zeila and Ethiopia’s 19% stake in Berbera Port in Somaliland.

According to sources who traveled with the Somali President to the summit, the Ethiopian Prime Minister Abiy Ahmed expressed his nations desire to build a naval base in Zeila where Farmajo has countered with a demand of his own that Ethiopia abandon its 19% stake in Berbera Port.

This account of the meeting is confirmed by western diplomatic sources based in Addis Ababa.

Prime Minister Abiy’s demand for a naval base in the Red Sea echoes Ethiopia’s Deputy Chief of Staff of the National Defense Force, General Birhanu Jula’s statement to the media about the reestablishment of Ethiopia’s naval forces.

It is unclear if any agreement were reached in the mutual demand to have Ethiopia abandon its 19% share of Somaliland’s Berbera Port for a concession to Ethiopia for naval base in Somaliland territory by the Somali President.

Ethiopian policy towards Somaliland has has pivoted to Mogadishu since Prime Minister Abiy took office where he sought closer ties with Somalia and particularly President of Somalia Mohamed Farmaajo. Somalia’s territorial integrity has been a recurring theme in every communique he has issued with Farmajo.

Prime Minister Abiy’s dealing with Somalia for territory in Somaliland is in stark contrast to a meeting his predecessor had with Somaliland’s previous administration of President Ahmed Mohamoud Siilaanyo where Ethiopian naval base in Zeila was discussed.

It is unclear how Prime Minister Abiy plans take ownership of any territorial commitment made by Somalia’s Federal in Somaliland.

A high ranking official from Somaliland government who did not want to talk on the record said “Farmajo is good at giving away things that are not his or even under his control, his sphere of influence is tighter than his necktie. Somaliland’s fate is in the hands of its people, no one else decides for us”

Djibouti has been left out of both meeting by Abiy, Farmajo and Afwarki but any discussion of Ethiopian forces in Zeila brings it in this mix however indirectly.  Djibouti’s influence in the Zeila territory is cemented by its tribal composition.

Though establishment of Ethiopian Naval forces has been mentioned by Abiy back in June and the idea seems to have come up repeatedly, military analysts state that that Ethiopia current navy is embryonic at best and lacks the ability to project power overseas.

It is unclear how the United Arab Emirates will percieve PM Abiy’s move to deal directly with Farmajo to try to acquire a territory for a naval base and abandon his country’s commitment to Berbera DP World port deal.

UAE has bailed out Ethiopia as recently as June 2018 with a billion dollar grant and additional two billion in direct investment and loans.