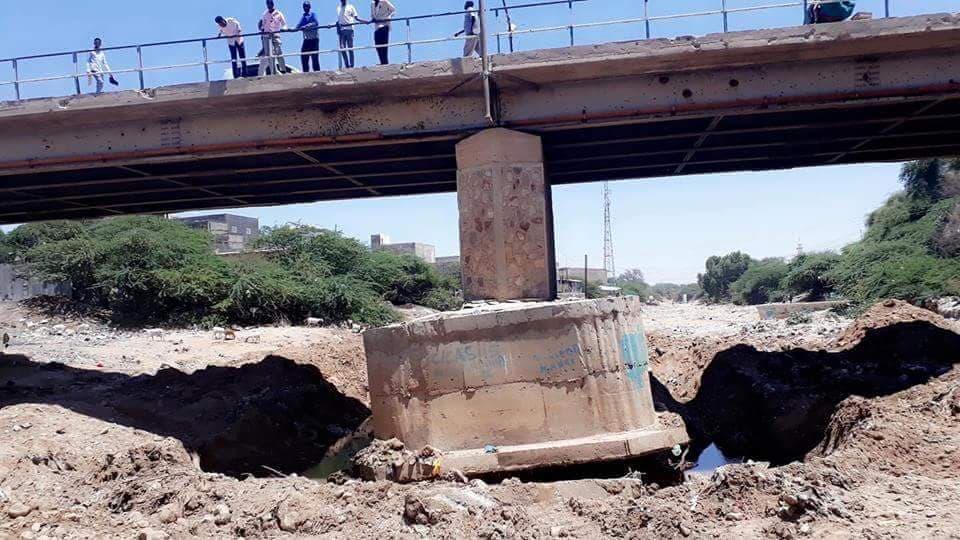 Hargeisa resident woke up to news that the main bridge that connects the city across its dry river bed is near collapse, there is a a massive concrete slap that is visibly leaning against the main spans of the bridge.

According to the Somaliland Road Agency, the responsibility of maintaining bridges and interstate connector highways are their responsibility.

According to one of the engineers from the Somaliland Road Agency, Abdillahi Abdisalam Sheikh Ali Jawhar, the concrete skirt is not part of the bridge support system and stated that it is an addition that was made in 2006 when erosion exposed the piles.

Engineer Ali Jawhar gave a detailed background of the issue and added that barrier intended to protect against erosion was washed out by recent floods. He stated that the bridge is stable and assured citizens that it is by no means collapsing.

Without specifying what sort of maintenance was being done, Engineer Ali Jawhar spoke of a lack of experience from personnel from the Ministry of Public works and without specifics stated that they should not have dug the base of the concrete slap around the middle span. It is this digging that supposedly caused the massive concrete slap to lean against the span.

The Ministry of Public works officials including the Honorable Minister, Abdirashid Dualeh Qambi, visited the the bridge, however there was little explanation to the maintenance work that led to the concrete slap’s tilt but mainly complained that they have been criticized.

There was no official statement from Hargeisa local government regarding the bridge or its state. The mayor however responded directly to criticism on social media with below response where he called his detractors “sick”.

While the Somaliland Road Agency promised to quickly cover the exposed base of the concrete skirt and may consider removing it all together, there was no mention of when the remediation work will start.