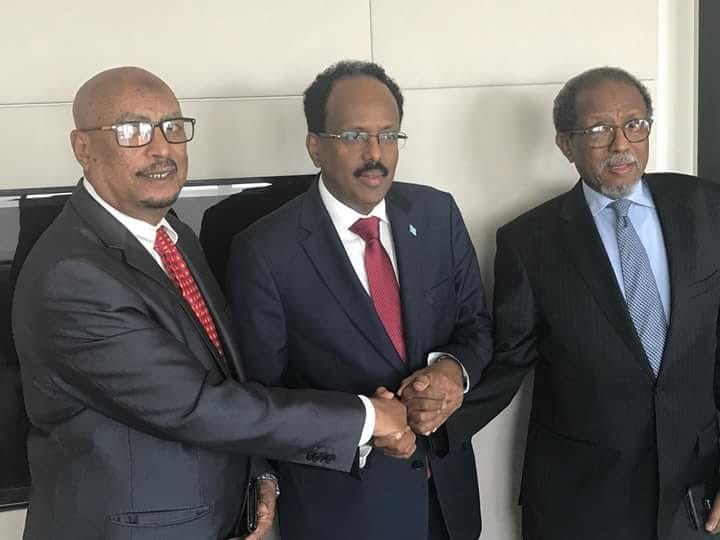 The Photo that Shocked a Nation

How did two giants of Somaliland’s political elite end up being photographed flanking the Somali President Mohamed Abdillahi Farmaajo, hand in hand? Hold on to your hat, there is a lot to unpack.

What was another week of business as usual in Somaliland was shattered by the surfacing of a photo of UCID opposition party leader Faysal Ali Waraabe and President of Khatumo State Ali Khalif Galaydh, holding hands with Mr. Farmajo.

Prior to this now infamous photo, both Warabe and Galaydh have been spotted in Brussels, the site of Somalia Partnership Forum though the reason of their visit to Belgium was not clear.

The uproar on social media was swift and intense, where some immediately accused the ruling party and the government of hypocrisy for not condemning Mr Warabe for meeting the Somali President. Others, including Mayor of Hargeisa Abdirahman Aideed “soltelco” have compared Mr. Warabe’s meeting with Farmajo with Prime Minister Abiye of Ethiopia and the President of Eritrea.

Can Mr Warabe Negotiate on Behalf of Somaliland

It is unclear if Mr Warabe saw an opening to achieve results similar to what Mr Abiye has done in the region by reaching out to foes and rivals and though he is the leader of one of the only three political parties in Somaliland and commands a high regard, legally speaking, he does not represent Somaliland in any capacity to enter into binding agreements on it is behalf.

The UCID party while technically an opposition party, has been seen as enjoying close working relationship with the ruling party of Kulmiye and President Muse Abdi Bihi.

Mr. Abdillahi Abdirahman Cirro, the leader of the Wadani opposition leader swung into campaign mode and in speaking to the media quoted former President of the United States “If you have to win a campaign by dividing people, you’re not going to be able to govern them”.

Mr Irro went on to talk about the most stinging attacks leveled against him and his party during the bitter election campaign where Kulmiye accused them of being Pro-Somalia.

The Wadani leader, flanked by his deputies Abdiqadir Jirde and the General Secretary of the party, went on to describe the state of the nation which he called dire and ill-managed.

Mr. Irro spoke about the upcoming parliamentary elections and that his party has not been part of the preparation since they have no confidence in the current Election Commission and have repeated asked the President to disband them.

Finally, Mr Irro asked if Kulmiye party has reneged on the promise of nationhood.

While the leader of the opposition leader has touched on many important topics, aside from airing of grievances against the ruling party and its leader or the President, he has not offered any solutions of note.

The President and the Last Word

The President of Somaliland HE Muse Bihi Abdi in a brief speech yesterday during his visit to the courts has clarified his government’s position on the Brussels conference, Mr. Warabe’s meeting with Mr Farmaajo.

President Bihi stated that the Brussels meeting was actually held for Somalia and their affairs and that Somaliland did not have a place in that conference. He added that his administration had disagreed with the EU on the format due to the fact that the host countries did not differentiate between Somaliland and Somalia.

“They [EU] said we will be granted Special Arrangement, and we told them we do not know what that is, Somalia has not conquered or occupied us, Somaliland and Somalia use to be two countries which united. That union has not worked and we have won our independence back. Either treat us as two separate countries or otherwise deal with Somalia and you can get back to us when the conditions are right. They understood our position and have not tried to force the issue ” Said President Muse Bihi speaking on the invitation his administration received from the EU for the Brussels meeting.

“We were completely blindsided” President bihi

“It does not concern us if funds are being given the Americans or the Europeans, unless we are not getting a direct aid as a separate country. We have sacrificed something greater than money to win our independence back, we are not discussing aid and funding, we are talking about the case for indepence for Somaliland” The President added.

Finally, the President addressed the meeting of Mr. Warabe, the leader of the opposition party UCID and the Somali President said “Our international partners understood and that is where we concluded the discussion regarding the Brussels conference, be that as it may, the Chairman of UCID went to Brussels, we were unaware of it, he did not consult us and its an entirely new matter and it is something that needs to be examined and discussed. We were completely blindsided, we were not even aware that he traveled, we were beyond surprised to hear about his meeting with Farmajo, it just something unbelievable and we will see what comes out of that”

President Bihi who is known to not respond to the daily news cycle seemed genuinely upset by the meeting of a leader of a major political leader with the President of Somalia who has been applying pressure on Somaliland on multiple fronts in recent months.

The President’s speech and how he clarified Somaliland’s position was a major hit with most Somalilanders’ including some opposition party members. The former Governor of Awdal and Sanaag, Mustafe Issa wrote on his facebook how much he agreed with the President’s speech regarding aid to Somaliland and has condemned Mr Warabe’s meeting with the Somali President.