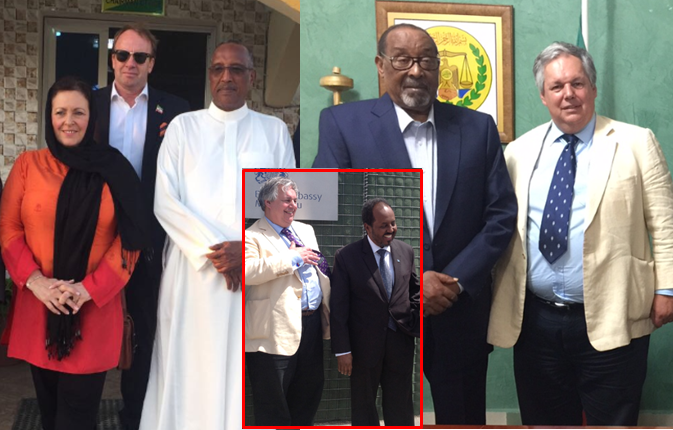 Mr Baldry is a former British MP who has been in public service for more than 30 years.

He has been a practicing Barrister or a lawyer for as long as he has been an MP; at times the two professions seemed to intertwined.  A point that has repeated come up during his long career as an MP.

During his long career as a politician, Mr. Baldry he has been involved in some 40 companies where held a directorship in many of these entities. And is still active in 8 entities as of this moment.

For a sitting MP, while this is not illegal to have private business, the sheer volume makes it is highly unusual.  What is even more puzzling is that the great majority of entities that Mr Baldry is involved with seem to be connected to foreign countries, especially third world or conflict zones. Here two particular entities we would like you to keep in mind.

Mr Baldry has been accused of range of improprieties, including corruption involving a Nigerian politician accused of money laundering and on another instance, the The Parliamentary Commissioner on Standards found him in  breach of code of conduct when he failed to disclose that he was a partner in a firm trading in blood diamonds in Sierra Leone.

On one instance, Mr Baldry has been accused of avoiding his tax obligations by his extensive use offshore registered companies.

Mr Fenwick is the co-founder and the Chief Operating Officer of the Anglo Somaliland Resources. He is a former salesman turned businessman. Unfortunately, there isn’t much to go on about Mr. Fenwick on the public records except, the impressive number of companies he has been involved in.

Much like Mr. Baldry, he has been quite busy in starting and closing down businesses with shocking frequency, in fact, the two gentlemen have been in business together for years according to filings with the British government prior to co-founding Anglo Somaliland Resources.

Sir Baldry and Mr. Fenwick have a long history in the Horn of Africa, in fact you dont have to look hard to find it. Before their arrival in Somaliland and Anglo Somaliland Resources, both gentleman have done extensive business with successive Somali Governments in Mogadishu.

Mr. Baldry has written and lobbied on behalf of Somalia and at times against the independence of Somaliland on the international stage so much that President Hassan Sheikh has granted him an honorary Somali citizenship.

On February 24 2014, Mr. Baldry did mention Somaliland but not in the way one would assume, he wrote that Somaliland needs to remain a part of the larger Somalia “There appears to be no desire to rush talks with Hargeisa, but rather the hope that over time Somalilanders would recognise that there is again value in being part of a larger de jure state, but within a federal structure that gives them maximum autonomy.”

Mr Fenwick has been part of everything Mr. Baldry has done in Somalia, including the sale of a biometric identification and a secure communication systems to the Government of Somalia.

Most of the business Mr Baldry and Fenwick conducted with the Government of Somalia has been done under different entities than Anglo Somaliland Resources. The companies that were used for Somalia dealings are mostly shuttered including SOMALI RESOURCES LTD (08474966), EUROPEAN SOMALIAN BUSINESS CHAMBER LTD (08233874) and CHAIN TELECOMMUNICATIONS (UK) PLC (06718086) and many many more.

Finding all the companies Mr Baldry and Fenwick started over the years takes some effort and there seems to be an effort to conceal some or create the appearance of not being connected to them. This is achieved by slight variation in how their names appear on the Company House registry.

Mr Fenwick, for any business intended for business with Somalia has used Ian Leonard Fenwick, this variation in name makes a huge difference. When looking at the registry, we found that Ms Kim Fenwick is also part of playing this game of musical Chairs.

Mr Baldry has done the same where companies are registered under variations of his name, there is Tony Baldry, Sir Anthony Brian Baldry and Sir Tony Baldry. All in an attempt to conceal and compartmentalize their various business dealings with Somalia.

We are not sure what happened with Somalia, but both Mr Fenwick and Baldry seem to have closed up shop in Somalia and had a sudden change of heart and pivoted to Somaliland.

They come bearing gifts (and Aid)

Right after most of the companies that both Fenwick and Baldry used to deal with Somalia have been shuttered, some closed down by British Authorities for insolvency and other violations. Anglo Somaliland Resources was established on February 2015.

Besides lots of photos with Somaliland Government officials and civic leaders such as Edna Adan, there isn’t much in terms of what Anglo Somaliland Resources has done in the public domain.

It’s charitable arm Anglo Somaliland Foundation, however seems to be humming with activities mostly directed to Edna Hospital. Mr Fenwick has given extensive interviews together with the Director of Edna Foundation on donations that he had personally collected from hospitals in England.

A total of one container that has been extensively photographed and documented was valued to contain around 200,000 British Pounds worth of donations by Mr Fenwick and its transportation costs were covered by the Somaliland community in England.

Anglo Somaliland Resources’ website has an impressive collection of photos featuring its charitable work but nothing related to the fishing contract it has signed with Somaliland.

Anglo Somaliland Resources’s contract with the Somaliland government has come under scrutiny and was criticized by the United Nations Security Council.

This report contains the most amount of detail that has come to the public regarding this contract.

To push back on the accusation of the report, for the first time, Mr Baldry and Mr Fenwick have given a lengthy interview to Somaliland TV to answer the allegations. But mostly characterizing the accusation as an anti-Somaliland effort.

Citing South Sudan and Eritrea as the newest countries to be recognized, in the interview, Mr. Baldry has criticized the United Nations for not recognizing Somaliland, even though in the very recent past he has advocated against recognition for Somaliland and remains an Honorary Somali citizen.

Mr Baldry has stated that since Somaliland is unrecognized, it is unable to sell fishing licenses itself which is where his firm comes in. The reporter from Somaliland National TV, does not seem to be asking any questions related to the substance of the contract but just the allegations in the Security Council Report.

The United Nations Security Council’s report states that Anglo Somaliland Resources gets 60% of every fishing contract it sells on behalf of Somaliland, where Somaliland gets 40%. Additionally, Somaliland has been paid 500 US Dollars on the signing on the contract and a 2000 annual fee.

“It is a classic case of bananas for your gold”

A commercial fishing is worth several hundred thousand dollars each but it is essential that fishing fleets are properly supervised to ensure only sustainable method of harvesting fish stocks are employed. Something Anglo Somaliland Resources promised to do in their contract but does not seem to have any sign of operation on the ground in Somaliland.

It is unclear how many licenses Anglo Somaliland Resources has sold on behalf of Somaliland over the three years the contract has been in effect.

Mr Baldry and Fenwick has met with President Muse Bihi Abdi at least three times, once as a President Elect and twice as President.

On one of the most recent meetings of Mr Fenwick with President Bihi was on May 18 celebration at the Presidential Palace. Mr Fenwick announced ASR’s partnership with Zhong Lun Law, a major Chinese law firm.

It is unclear why Mr Fenwick would meet the President of Somaliland with lawyers in tow. What is clear is that HE Muse Bihi Abdi is aware of this contract and Anglo Somaliland Resources.
We have reached out to Somaliland officials from the Ministry of Fisheries to ask about the contract with ASR, how many contracts it has sold on behalf of Somaliland so far, what sort of “development and preservation” ASR is conducting and we have informed that they are unaware of the contract we are referring to and are unable to locate it.

Somaliland, once again, seems to taken advantage of by sophisticated con men, who came through the classic paths of helping seek recognition and international aid and Development.
“Somaliland leaders are either too incompetent to have signed this sort of contract or are criminally complicit” is how a former high ranking official of the Ministry of Fishery described the contract. “They already had the contract written and the Minster simply signed it, we assume they had friends at higher places” he added.
A young lady who is involved with humanitarian work and is affiliated with NAGAAD network, under condition of anonymity told us “It is a classic case of bananas for your gold”
Reverting back to their old game of shell companies, Messrs Baldry and Fenwick have created yet another entity called BERBERA MARITIME RESOURCES LTD

Prominent Somalilanders Increasingly Under Attack On Social Media, We Must Ask Ourselves Why and By Whom?

Hargeisa: A City Blessed With Precedence