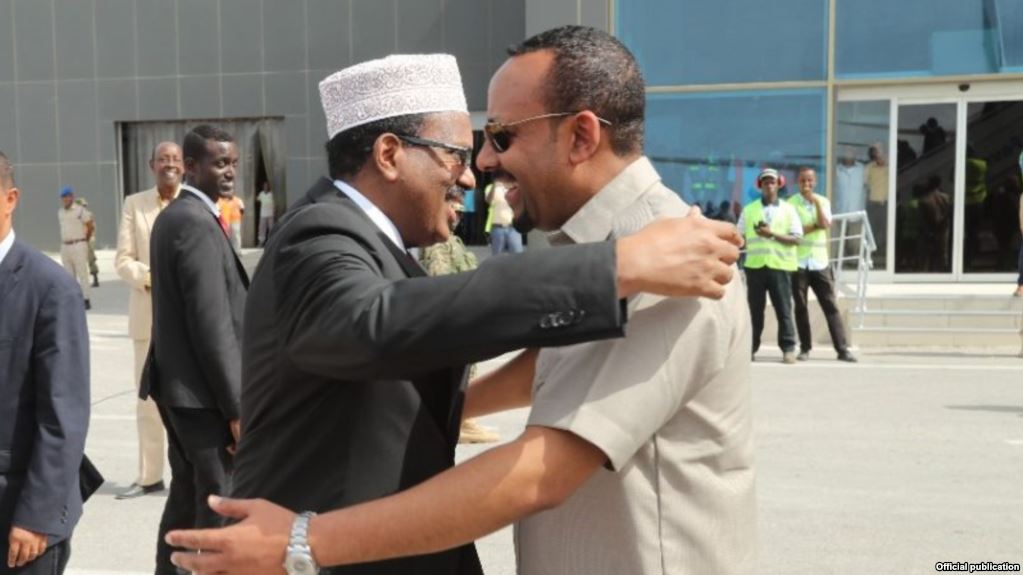 The Ethiopian Prime Minister Dr Abiy Ahmed paid an unexpected visit to Mogadishu on Saturday June 16th to meet the Somalia’s President Mohamed Abdullahi Mohamed. The newly elected Prime Minister has been on a whirlwind of visits to meet with Ethiopia’s regional traditional rivals and other African leaders but his visit to Mogadishu has been the most discussed and auspicious yet.

Dr Ahmed’s visit to Mogadishu follows another meeting a day earlier in Addis Ababa, Ethiopia where the Crown Prince of Abu Dhabi Sheikh Mohammed bin Zayed bin Sultan Al-Nahyan signed 3 billion US dollars loan and investment agreements, including a one billion foreign currency support. According to the signed agreement with Ethiopia, UAE will make an immediate transfer of 1 billion US dollars to the National Bank of Ethiopia to alleviate the foreign currency shortage in Ethiopia.

Dr Abiy’s visit to Mogadishu differed from all meetings he has had so far with any leader, in that he swapped his sharp tailored suit for a casual khaki and according to eye witnesses and photos of his visit to Mogadishu and also brought with him a massive force of Ethiopian Special Forces for security escort. Somali security personnel where no where to be seen.

“Don’t let his charming smile fool you or the Doctorate for that matter, Abiy has fought against Mengistu Haile Mariam as a teenager and rose to the rank of lieutenant colonel as an intelligence officer, he knows what he is doing and saw action in many conflict theaters in Africa, this is not his first rodeo the Prime Minister was a peace keeper in Rwanda during the genocide!

In a joint Communiqué issued by the Prime Minister and the President of Federal Government of Somalia Mr. Farmajo, Mr. Abiy has won massive concessions that did not show any reciprocity on the part of Ethiopia.

Article #7 is the most significant of the Communiqué points to a joint Ethiopian – Somali investment in four unspecified ports in Somalia and land transportation network. Ethiopia is land locked and has no ports of its own to contribute to this bilateral agreement with Somalia.

The timing and the optics of the meeting raised many questions, a day after meeting with the the Crown Prince of Abu Dhab and a massive infusion of 3 billion dollars with 33% or 1 billion to be immediately transferred to Ethiopia, the Ethiopian Prime Minister visits Mogadishu.

To many observers, this was a rather unexpected turn of events that Somalia would concede four ports to Ethiopia while the trilateral deal of Somaliland, DP World and Ethiopia added to the political instability of Somalia that led to the ouster of the former Speaker of the Parliament as well as the numerous grievances that Somalia filed in the UN Security Council against this deal.

Prime Ministry Abiy stated that he wants to build an Ethiopian Navy though at the time it was not clear where it would be based on despite that his country is landlocked.

Somalia Amb to the U.N. @AbukarOsman1 tells Security Council that the military base UAE is building in Berbera is “in clear violation of international law”, calls on UNSC Security Council to “take the necessary steps”. pic.twitter.com/vxV6NUFwBr

There is no evidence that Mr Farmajo has brought up the Prime Minister’s ambition to build and base a navy in one or all of the four Somali ports he won in this concession.

Others point to the very nature of the meeting between Dr Ahmed and Mr Farmajo where it seemed the Ethiopian Prime Minister has gone to great lengths to show that the Somali leader was not his equal. Social media has been a blaze from the Prime Minister’s safari attire to the photo of him hugging Mr Farmajo to assert dominance and his justified distrust of all Somali security personnel and instead bringing a large contingent of Ethiopian Special Forces to guarantee his safety.

A western diplomat who did not wish to be named said “Don’t let his charming smile fool you or the Doctorate for that matter, Abiy has fought against Mengistu Haile Mariam as a teenager and rose to the rank of lieutenant colonel as an intelligence officer, he knows what he is doing and saw action in many conflict theaters in Africa, this is not his first rodeo the Prime Minister was a peace keeper in Rwanda during the genocide!” of the Ethiopian Prime Minister.

Despite the minutia and the level of detail the media and the public has analysed the meeting and the resulting Communiqué, another important but overlooked article is #12

Though article #12 of the Communiqué is lacking in detail, many who were privy to the discussion stated that the Prime Minister was has strongly suggested that Somalia officially renounce any territorial claim of the Ogaden region of Ethiopia and declare the Ogaden National Liberation Front a terrorist group. While some media outlets interpreted this article as a sign that Ethiopia no longer supports an independent Somaliland.

A Villa Somalia protocol official who feared for his safety described the meeting in lopsided and Mr Farmajo in a demure and submissive state he has never seen, saying “Abiy came, he conquered and humiliated Farmajo and if I see my name in the paper, I will be shot dead and they will say it was Al-Shabaab. This was the saddest thing I have witnessed in my 40 years of service to my country”. Adding “They even disarmed Farmajo’s own security and inspected the Somali honor guard’s weapons to ensure there was no ammo”.

When reached for comment, on condition of anonymity, a high ranking official in HE President Muse Bihi government said “We have enjoyed watching Somalia flail and file complaints about the Berbera DP World to anyone who would listen, now they conceded four ports to Ethiopia in one meeting, obviously, we congratulate Prime Minister Abiy for his impressive negotiating skills but this is not our business, this is a bilateral agreement between Somalia and Ethiopia. Unlike Somalia, we respect other countries decisions and self determination and we don’t try to control things beyond our sphere of influence.”

President Bihi Inaugurates the Opening of the Largest Bridge in Somaliland